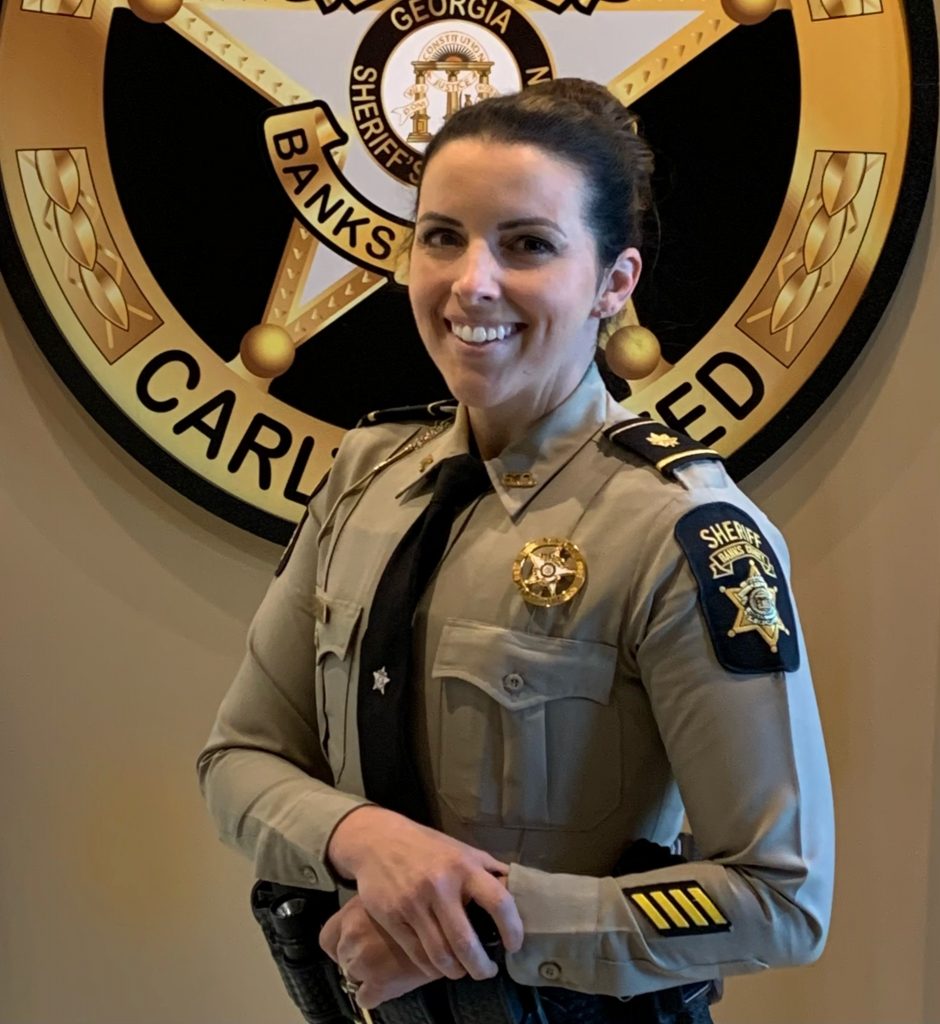 Major McFaddin began her law enforcement career in 2006 at Elbert County Sheriff’s Office where she commenced as a patrol deputy.  She was promoted to Deputy First Class in 2007 and again promoted to Corporal in 2009 where she served as assistant shift commander.  In the fall of 2009, Major McFaddin was promotionally transferred to the S.T.E.A.L.T.H. Unit where she gained extensive training and certification in the area of traffic enforcement, vehicle collisions, vehicular fatalities, impaired driving, child passenger safety and community oriented policing.

From 2014 to 2016, Major McFaddin did accomplish the implementation of the agency’s organized boards for use of force and pursuit reviews, risk analysis, promotional reviews and hiring reviews; revamped the hiring process to include physical agility testing, reading comprehension and problem solving, voice stress analysis, psychological evaluation and physical examinations; developed thorough field training programs which were implemented in all divisions and units within Banks County Sheriff’s Office; and thoroughly enhanced the evidence and property room along with its processes to meet and exceed Georgia’s State Certification Standards.

Major McFaddin was promoted to the rank of Lieutenant over Office of Professional Standards and Training in May 2016, where she then took on an additional duty of Internal Affairs and passed on the role of Evidence Custodian to a highly trained and experience specialist.  The extensive workload in preparation for Georgia State Certification proved to be successful for in the fall of 2016. Banks County Sheriff’s Office was granted the status of a state certified agency in law enforcement after a very successful audit.  Major McFaddin was granted recognition through Georgia for this great accomplishment and for the exceptional effort in gaining certification status during Sheriff Carlton Speed’s first term in office.

In 2017, Major McFaddin graduated from Liberty University where she earned her Bachelors of Science degree in Criminal Justice—Public Administration.  In addition, she was selected and appointed to a position, which she still holds, on the Georgia State Certification Committee through the Georgia Association of Chiefs of Police.  Also during this year, Major McFaddin gained her Supervisory Certification through Georgia and began her specialized certification of Human Resource Management through University of Georgia’s Carl Vinson Institute of Government.  Her projected graduation date is set for the Spring of 2022.

Major McFaddin was promoted to Captain of Support Services in April of 2018 where she was responsible for the Detention Center, Court Services, Quartermaster, Office of Professional Standards, Training, Fleet Management, Community Affairs and Public Information.  In August 2018, she completed the FBI Georgia Law Enforcement Executive Development Course where she received certification through Reinhardt University. In the Fall of 2018, she attended Sam Houston University in Texas where she received certification through the National Jail Leadership Command Academy (Class 30).

In May 2019, Major McFaddin was transferred to Captain of the Uniform Patrol Division.  She held the role of Division Commander for which she oversaw the daily operations of Patrol, Canine Unit, S.T.E.P. (Selective Traffic Enforcement Program) Unit, and H.E.R.O. (Heightened Emergency Response Officer) Unit.  Most recently in September of 2020, she was promoted to her current position of Major within the Headquarters Bureau.  In this position, she oversees the Detention Division and Central Operations; Court Services Division and Warrants Unit; Terminal Agency Coordinator; Facilities and Projects Unit; Quartermaster and Fleet Unit; Inmate Work Detail; Excess Property Program; Human Resources and the Administrative Office.